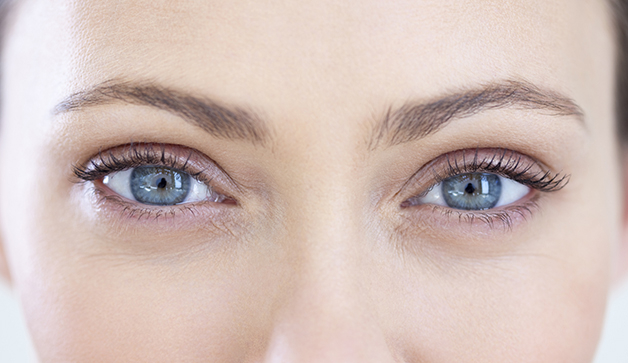 Forget the whole soul thing—the eyes are actually a window to your health. “Simply by looking in someone’s eyes, we can see things like arteries, veins, and nerves, which are a reflection of what’s going on in the rest of the body,” says Rahul Khurana, MD, a retina specialist in northern California. That’s why the American Academy of Ophthalmology recommends everyone get a baseline eye exam by age 40, if not before (if everything looks good, your doctor can decide how often you should follow up). The benefit, of course, is easily catching potential problems early on. Here, 10 important health conditions your eyes can signal.

You’re seriously stressed.
Notice your vision blurring whenever you work late? Staring at your computer screen may not actually be the culprit. Stress has been linked with fluid buildup under the retina (the layer of tissue at the back of the eye that filters images and sends them to the brain), which results in hazy vision. A study published in the British Journal of Ophthalmology found that 37% of subjects suffering from this ailment (called Central Serous Retinopathy) had dealt with “elevated stress” shortly before being diagnosed, and animal studies show that a shot of adrenaline, which our bodies release in high-pressure situations, could trigger the condition. The good news: For most people, blurry vision resolves itself within three to four months.

You have high blood pressure.
Hypertension is known as the “silent killer” because the condition, which can lead to heart disease or a stroke if untreated, has no visible symptoms. Except, that is, in the eyes. High blood pressure can trigger changes in the retina’s tiny blood vessels—causing them to narrow or balloon—which can signal problems with bigger vessels that supply the heart, brain, and kidneys. If your eye doctor notices this, get to a cardiologist, stat: A study in the Journal of the American Medical Association linked retinal changes with an elevated risk of heart failure. (Keep your blood pressure in check with these 13 ways to lower your blood pressure naturally.)

You should eat more carrots.

If you’re having trouble seeing at night, you might need to load up on orange veggies and protein. Night vision issues are common in people whose diets are short on vitamin A, which is found in foods like carrots, sweet potatoes, spinach, and beef. Too little vitamin A can mean a decrease in a pigment called rhodopsin, which controls how the eye perceives light. The fix: Get at least 700 mcg of vitamin A daily, the recommended amount for adult women.

You’re suffering from inflammation.
You’ve been waking up with achy, bloodshot eyes for a week, but you’ve been logging 8 hours of sleep every night and avoiding alcohol. What gives? The pain and redness may be a sign of uveitis–inflammation within the eye—and it can signal inflammation elsewhere in your body. The condition, which flares up when the immune system attacks its own tissues, is a marker in ailments from psoriasis and Crohn’s to rheumatoid arthritis; the latter causes eye-related symptoms in 25% of sufferers. “When inflammation manifests itself in the eye, that often tips us off to other conditions,” says Khurana.

Your thyroid is wonky.
If your go-to selfie expression is more deer-in-headlights than duckface, you may want to get your thyroid checked. Graves Disease, the most common cause of bulging eyes, is triggered when the thyroid gland goes into overdrive and produces hormones that attack muscles and tissues within the eye socket (a condition called hyperthyroidism). Women are especially at risk for Graves; it affects them five to six times more than men and causes eye-related complications in more than 50% of sufferers.

Your IQ is impressive…or not.
Did you ace most of your college classes? Breeze through War and Peace? The blood vessels in your retina might be to thank. A 2013 study published in the journal Psychological Science found that the appearance of those vessels can determine your cognitive abilities. The study looked at the retinal vessels of adults in their 30s; people with narrower ones fared better on verbal comprehension and memory tests, while their wide-vesseled counterparts were found to have lower IQ scores, even after accounting for health and lifestyle risk factors. “The small vessels in the eye may reflect the condition of vessels inside the brain because they share similar size, structure and function,” says Idan Shalev, PhD, an assistant professor of biobehavioral health at Penn State University and one of the study’s authors. “They provide a window to study the health of the brain.” (The next step for scientists: finding out why wider vessels are associated with poorer brain function.)

You have diabetes.
According to the American Diabetes Association, 30 million Americans suffer from the disease, but only about 8 million have been diagnosed. A simple eye exam can alert you to the problem: A 2014 study commissioned by United Healthcare found that diabetes is the chronic health condition most likely to be identified during an eye exam. That’s because high blood sugar levels can manifest in several places in the eye, such as weakening blood vessels in the retina, causing protein to leak into the macula (the part of the eye responsible for focusing), and blocking oxygen and nutrients from getting to the back of the eye. And while diabetes-related retinal damage is the main cause of vision loss in Americans aged 20 to 74, don’t fear: If the condition is caught early—and if you manage your blood sugar levels properly—the condition is unlikely to progress. (Do you know your diabetes risk? Take this quiz to find out.)

Are you battling under-eye circles that no amount of concealer can cover? Allergic rhinitis, which affects one in seven Americans and causes inflammation of the mucous membranes in the nose, could be the cause. Breathing in anything from pollen to pet hair can clog sinuses and trigger a reaction that causes blood to pool under the eyes (the thinnest-skinned spot on your body), which results in a bruise-like “allergic shiner.” Thankfully, the problem can usually be fixed by popping an antihistamine. (Here’s how the pros cover up dark circles.)

You’re depressed.
Do you have trouble tearing your gaze away from sad pictures in the newspaper? The urge to avert your eyes (or not) can be a tipoff to your mental health. Studies that have tracked eye movements of people with mental illness—think anxiety, schizophrenia, and bipolar disorder—found that they have different gazing patterns (i.e., they tend to look at certain things longer, or not as long) than their healthy counterparts. A 2013 study in the Journal of Abnormal Psychology, for example, found that depressed people took significantly longer to look away from photos of “negative stimuli,” like sad faces, versus those who aren’t depressed. Researchers theorize that people display a bias toward images that reflect their state of mind.

Your nervous system is out of whack.
When it comes to nerve disorders like multiple sclerosis, the eyes can provide an early clue that something’s wrong. That’s because the optic nerve, which sits at the back of the eye and transmits details about what you see to the brain, is part of the central nervous system, the same network that MS affects. Inflammation in the nerve, called optic neuritis, is diagnosed in as many as 75% of MS patients, and in up to a quarter of cases, it’s the first sign (along with blurred vision and pain when you move your eyes) that something is amiss.

Coping With Anxiety in Social Situations