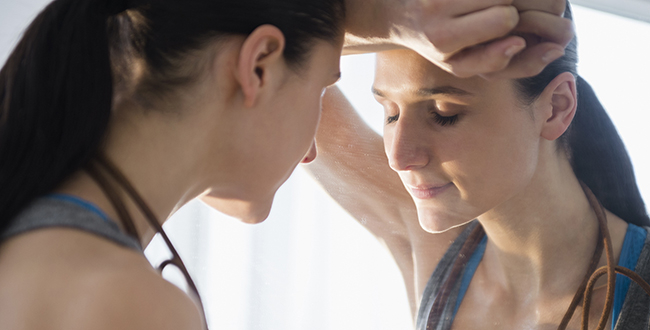 Menopause is, to put it politely, unpleasant. And while the average age at which most women experience the hot flashes, mood swings, night sweats, and sleep problems (seriously, what exactly did women ever do to be so lucky?) is 51, it’s possible for changes to begin much sooner. “There’s a very wide range for normal age of menopause, but it’s considered ‘early’ when it occurs before 40,” says Margery Gass, MD, executive director of the North American Menopause Society.

Most women affected by early menopause know it’s coming: Chemotherapy, radiation therapy, and an oophorectomy (removal of the ovaries) are all common causes. But it can also be due to lifestyle, environmental, and genetic factors. And even though only 1% of women hit menopause before 40, the factors behind an early change also affect the risk for a handful of illnesses and diseases.

Check out these 7 things early menopause can mean for your health:

1. You have a lower risk of breast and ovarian cancer.
Let’s start with the good news: “Women with higher circulating levels of estrogens have a higher risk of developing breast cancer, so those who hit menopause earlier actually have a lower risk of breast cancer than women who reach menopause later,” says Elizabeth Bertone-Johnson, an associate professor of epidemiology at the University of Massachusetts. This is a similar case for ovarian cancer, which is directly linked to your number of ovulations, so the fewer ovulations you have, the lower your risk compared to women who experience menopause later in life, she adds.

MORE: Does Soy Affect Your Breast Cancer Risk Or Not?

2. You’re aging faster.
And now, to the darker side of early menopause. Telomeres are tiny structures that protect DNA from damage, and, based on their length, can indicate your biological age. (Shorter telomeres equal more advanced aging.) Research presented at the annual meeting of the American Society for Reproductive Medicine (ASRM) in October 2014 suggests that women who experience menopause early see shortened telomeres—and damaged genetic structures—sooner than others. Every woman is born with a certain number of eggs, and one of the most widely accepted menopause mechanisms is that changes occur once your body has emptied its egg stores. How does this connect to telomeres? The researchers found that 25- to 45-year-old women with lower-than-average egg counts for their age (and who are therefore closer to reaching menopause) had shorter ones, indicating accelerated aging.

3. You may have been exposed to toxins.

Women whose blood and urine tested high for chemical levels found in plastics, personal-care products, common household items, and the environment hit menopause 2 to 4 years earlier than women with lower levels of these chemicals, according to a recent study from Washington University in St. Louis published in PLOS ONE. A lot of these toxins are uncontrollable—in the soil, water, and air—but researchers also point to everyday chemicals like those from microwaving food in plastic containers and synthetic ingredients in cosmetics, like phthalates. In fact, tests conducted by the Campaign for Safe Cosmetics in 2002 found that 72% of popular cosmetic products tested, including shampoos, deodorants, and fragrances, contained harmful phthalates. Regardless of how you’re exposed to them, the theory is that toxins may have an effect on how quickly your egg follicles are released or how badly they’re damaged, says Gass. And since egg-less ovaries are one of the accepted mechanisms of menopause, this means that toxins speed up the timeline of menopause.

4. It might not be early menopause—and you could still get pregnant.
Early menopause has a copycat: Primary Ovarian Insufficiency (POI), previously known as premature menopause, and defined as a loss of normal function of your ovaries. Women with POI don’t have regular periods, which makes many think they’re in early menopause. The difference is that with POI, you can still get pregnant, says Gass. “It’s rare, but possible. It’s never definitive that you’re in early menopause and not in POI, because there’s no test that can tell the difference. So either way, if you don’t want to get pregnant, you need to still use contraception,” she explains. (Even women who experience menopause in the normal age range are advised to wait one year from their last period to assume they’re infertile.)

5. You have an increased risk of heart disease.
Women who go through menopause naturally (as opposed to menopause brought on by chemotherapy or ovary removal) before age 45 have a 40% higher rate of heart failure than women who hit it at 50 to 54 years old, according to a 2014 study from the North American Menopause Society. But for every year over 45 you experience the change, the rate lowers by 2%. What’s the deal? High estrogen levels are linked to healthier cholesterol levels and blood vessels, leading researchers to believe that estrogen has a protective effect on your cardiovascular system. Early onset of menopause means fewer years reaping the benefits of estrogens and more time in a low-estrogen state, says Bertone-Johnson.

6. You’re at a higher risk for bone fractures for a longer time.

Lower estrogen levels mean lower bone density. And while all women experience a drop in bone density when they go through menopause, women in early menopause will spend more years with weaker bones compared to their friends who don’t see a decline until their 50s. But you don’t need to be too alarmed. The main risk for fracture is older age. “We don’t tell post-menopausal women to slow down, so the same advice applies to early menopausal women: You just need to live a healthy, active life with adequate calcium and vitamin D, avoiding things we know are harmful to bone,” says Gass. A plethora of studies have proved the importance of vitamin D on your bone health, but taking 1,000 mg of calcium and 1000 IU of vitamin D daily—particularly before you work out—may help you avoid age-related bone loss, according to a University of Colorado study. (Take a look at the 10 worst things that can happen when you don’t get enough vitamin D.)

7. You have an increased risk of Alzheimer’s disease, diabetes, and cancer.
Shorter telomeres indicate more than just expedited aging—damaged DNA actually increases your risk of age-related illnesses, including Alzheimer’s, diabetes, and cancer, according to research. Lower estrogen levels may factor in: Your brain is part of that cardiovascular system estrogen helps protect, says Bertone-Johnson says. Genetics could play a role too. “Genetic mutations often have more than one negative effect, so the genes that are causing early menopause may cause other hereditary diseases,” says Gass. For example, a gene associated with Parkinson’s is also linked to early menopause, and there may be more that researchers have yet to pin down.

Why You Should Be Eating 2 Eggs...

Angelina Jolie Opens Up About her Struggle...

Acne Cysts And Their Treatment

7 Things to Know Before You Donate...